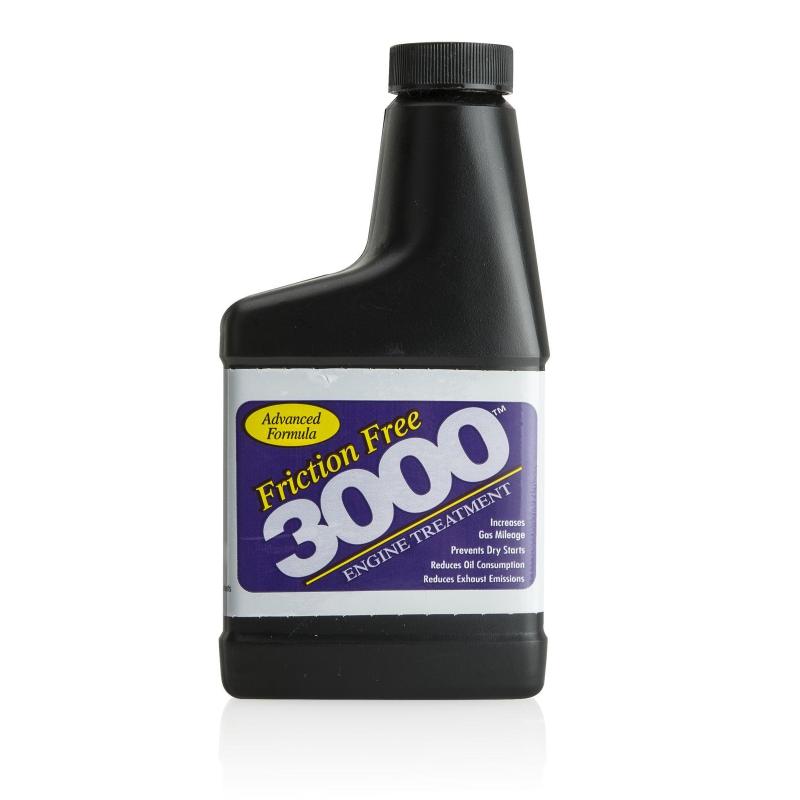 Friction Free 3000 Engine Treatment is an engine oil additive lubricant made of soft ductile metals, uniform and spherical in shape, ranging from 5 to 15 microns in size. These soft metals are coupled with special suspension agents to provide a solid boundary lubrication that can provide enhanced engine performance even under extreme conditions. Friction Free 3000 Engine Treatment has been shown to provide superior engine lubrication, improve engine power, increase fuel economy, reduce emissions and reduce engine surface wear. And it's so easy! It only takes 15 seconds to add a bottle of Friction Free 3000 to your car's oil. Do this after each oil change for best results.

Friction Free is recommended for oil filters having pore sizes of 20 microns or greater.

*It is not recommended for diesel engines, positraction or limited slip differentials, or any unit requiring limited lubrication, common reservoirs (wet clutches), 2-cycle engines where oil and gas are mixed, centrifugal hydraulic systems or high pressure multi-stage compressors over 500 psi. Friction Free 3000 is intended for use in gasoline engines and should be poured into the oil reservoir, NOT the fuel tank. It can be used in small 4-cycle engines. Friction Free 3000 is compatible with both standard and synthetic motor oils.

Transmissions and Gearboxes: Friction Free 3000 can be used for standard transmissions, differentials and gearboxes, but is NOT intended for use in limited slip or positraction differentials, or any unit requiring limited lubrication.

Compressors and Hydraulic Systems: Friction Free 3000 may be used in hydraulic systems. Treatment ratio is 2 oz. per gallon up to 5 gallons, then add 1/2 oz. per gallon thereafter. This product is NOT intended for use in high-pressure, multi-state compressors over 500 psi.

What do you mean by boundary?
There are two levels of lubrication. The first, "hydrodynamics," relates to the film between the surfaces in question. This is the primary purpose of the lubricant. When the film is removed, we need some form of "boundary" or secondary level of protection as the two surfaces are directly in contact with each other — there is no longer a fluid "film" between them. In these extreme cases, Friction Free 3000 Engine Treatment provides a measurable advantage. Plating that occurs on the bearing surfaces with use of Friction Free 3000 provides excellent "boundary" protection to overcome (on a temporary basis) the damage that would be caused with such extreme cases of increased friction and temperatures.

Should I be concerned because of the "lead"?
Friction Free 3000 Engine Treatment uses "elemental" lead. It must be converted from this form to an organic or inorganic compound to pose any significant threat. While caution should be used with all chemical products, the potential risk to a customer is very low and virtually nonexistent if proper handling procedures are used and the bottle instructions are carefully followed.

What can I expect by adding Friction Free 3000 Engine Treatment to my engine oil?
The Friction Free 3000 Engine Treatment micro-metallic formulation can translate into a smoother running engine. Lower operating temperatures, better fuel economy and reduced oil consumption are just a few of the added benefits reported to us by our customers. Because of the plating and more efficient combustion, exhaust gas emissions are also lowered. This means a cleaner and healthier environment for everyone.

Will the oil ring on the piston clog or cake up when using Friction Free 3000 Engine Treatment?
No. It will not.

Will Friction Free 3000 Engine Treatment clog up the oil filter?
Not standard oil filters. It can, however, clog up the "toilet tissue" filters (the ones made of very fine material used on customized vehicles, 5-7 micron pore size).

Why should I consider Friction Free 3000 Engine Treatment?
Oils are already blended with additives, which serve various requirements. Dispersants/detergents, oxidation inhibitors, extreme pressure anti-wear agents and friction modifiers are but a few of the many "ingredients" in today's motor oils. Though sufficient, these "additives" do not address the gradual wear, surface irregularities and high demands placed on engines by most drivers. Friction Free 3000 Engine Treatment's unique micro-metallic formulation enhances the lubricity surfaces.

What do you mean by slipperiness?
A lubricant must allow the surfaces to pass along each other with the minimum of friction. Friction is directly related to heat, wear and fuel economy. Friction Free 3000 Engine Treatment increases the lubricity of the oil — allowing the two surfaces to pass smoothly.The particles (spherical in shape) act as microscopic "ball bearings".

Will these "ball bearings" get caught in the oil filter?
Factory filters trap particles in the 20-25 micron range. Through the process of atomization, we select pharmaceutical grade copper and elemental lead for Friction Free 3000 Engine Treatment. These micro metallic elements are smaller, 5-15 microns, so they do not get filtered out. As a reference, baby powder (talc) is in the 20-micron ranges so you can see we are talking very fine down in the 5-15 micron range. Through the incorporation of a patented blend of the micro metals — size, percentage, and concentration — Friction Free 3000 plates the surface imperfections (worn areas). Much like a plasterer who fills imperfections with wall compound, the soft and malleable micro metals in Friction Free 3000 pack, fill and "plate" the irregularities in the bearing surfaces. This aspect of Friction Free 3000 is documented in the U.S. Patent on which our formula is based. This patent number is printed on each bottle, giving us credibility in a competitive area where many products and claims are made without substance. This plating also gives Friction Free 3000 superior "boundary" lubrication characteristics.

LEAD
Lead is a dull gray, soft metallic element. It occurs naturally in many forms but most commonly in the sulfide mineral, galena. The natural galena is processed and elemental lead is produced.

Elemental lead has many uses in its pure state and is particularly important in car batteries. The greatest uses of lead occur from its chemical derivatives such as lead sulfide or lead chloride. The most important and best known use of lead is as an organic derivative, tetraethyl lead, and the anti-knock additive used in gasoline. This compound has been used heavily for several decades.

There is widespread concern over the toxicity of lead and its place in the environment. Well publicized lead toxicity dates back to use of leaded pottery during the Roman civilization. More recently, child poisoning due to lead paint ingestion has made the news. The current concern of lead poisoning and toxicity is the contamination of the environment by automobiles that use leaded gasoline. The use of this component is currently being curtailed and should drop to a negligible amount in the near future.

The toxicity of lead and its compound is serious and should not be taken lightly. However, several factors must be considered if one is to adequately access the risk. While lead poisoning is a serious industrial problem, the mere presence of lead and its compound does not necessarily result in exposure or poisoning. The lead substance must enter the body in some form before any exposure actually exists. It can be taken into the body in any of the three ways: inhalation, ingestion, or absorption through the skin.

When lead or its compounds are ingested, most of it passes through the body unabsorbed. Some are caught by the liver and eliminated in the bile. Some are aborted by the body and begin to accumulate. The effects are generally cumulative and slow to manifest themselves.

When lead or its compounds are inhaled, the bulk of the material is trapped by the upper respiratory system and eliminated through the stomach. Some of the material may reach the lungs where it is trapped. This material is readily absorbed into the blood stream. This type of exposure can result in rapid poisoning and almost immediate symptoms.

Absorption through the skin is not considered a serious problem in most cases. The exception is for organic lead compounds. These materials are readily absorbed and can cause immediate toxicity. The major culprits are compounds like tetraethyl lead.

The level of toxicity in the body is a direct function of the amount of materials that are absorbed. The absorption rate is directly dependent on the type of lead compound. Inorganic lead salts like lead chloride are absorbed fairly easily by the body and are not a serious problem. Organic lead compounds are always a threat. Elemental lead as a species is not absorbed by the body. It must first be converted to a salt by chemical reactions before it is absorbed. Therefore, the risk from exposure due to elemental lead is less than that from other lead compounds. A risk does exist, but the actual level is not well understood. Since lead is a cumulative position, no risk should be overlooked.

Lead poisoning commonly appears as one of several clinical problems. Lead poisoning is most often classified as (a) alimentary; (b) neuromotor; or (c) encephalic. Alimentary toxicity is the most common with the patient experiencing abnormal discomfort with possible constipation, loss of appetite, nausea, vomiting, insomnia, weakness, and joint and muscle pain. Neuromuscular toxicity is most frequently associated with loss of adequate control of the wrist, the hands, the feet and disorientation. Seldom is paralysis observed, but it can happen. Encephalitic toxicity is usually associated with rapid and heavy lead absorption. It is observed as stupor, dizziness, headache, confusion, and often convulsion. In any case, diagnosis should be made only upon confirmatory data from blood and urine tests.

Consider the case for Friction Free 3000 Engine Treatment. This product contains elemental lead dispersed in an oil base. In this condition, it is not likely that material will be inhaled. Upon contact with the skin, it is easily washed off and poses no more threat than handling a lead brick. The primary mode of exposure to the lead would be by ingestion.

If this product were ingested, it could result in assimilation and poisoning. However, consider that only a small amount of the available lead could be absorbed because it is in the wrong form, it is in an oil carrier, and is passed through the digestive system rather quickly. Of course, numerous exposures due to any source can be harmful and any exposure should be avoided if possible.

The U.S. Department of Labor's Office of Safety and Health Administration (OSHA) inspected the manufacturing facility and gave its stamp of approval especially when they discovered that Friction Free 3000 Engine Treatment Lubricants used elemental rather than organic/inorganic lead compounds.