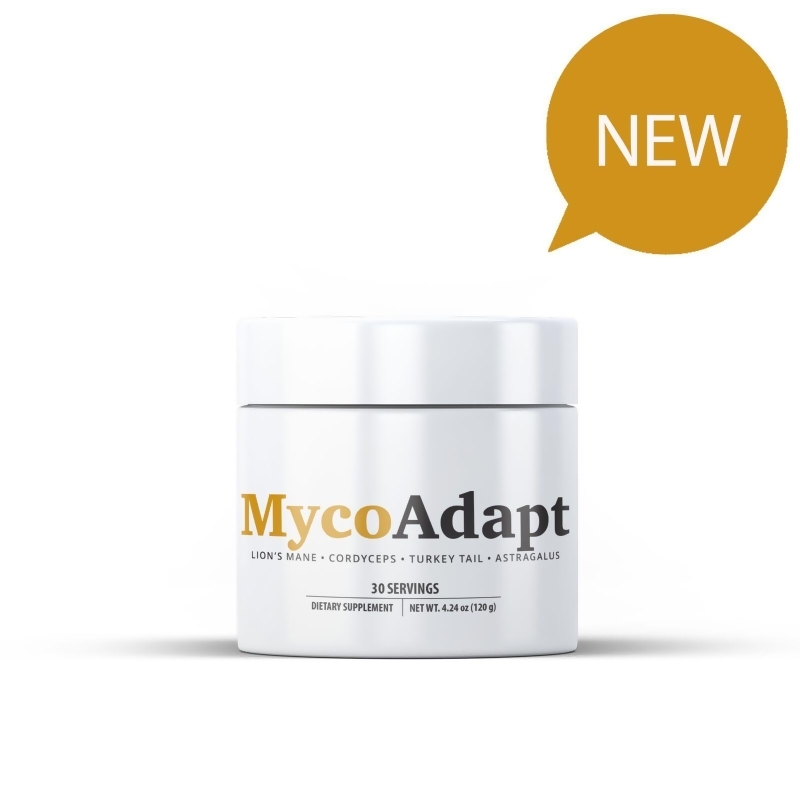 What Makes This Product Unique?

Mushrooms have been used for centuries by many cultures based on the belief that they support important health functions. But what makes mushrooms so popular is their pleiotropic effect, meaning their beta-glucan polysaccharides, naturally occurring antioxidants and other bio-active compounds. These properties can affect multiple systems in the body, from supporting the nervous system to assisting digestion and immune function. The Chinese strongly believed that mushrooms could help reach “Qi” (i.e., the overall balance of the body and its systems) to support the maintenance of the body’s “vital energy”, or what we know as the immune system. Mushrooms are well studied for their immune qualities as well as energy and adaptogen potential. MycoAdapt is formulated with a mixture of ingredients that offer a healthy balance of adaptogens intended to help promote the harmony of the body and its many systems that play into the overall immune system.

MycoAdapt (‘myco’, meaning mushrooms and ‘adapt,’ meaning adaptogens) delivers 4g of powerful mushrooms, that work cohesively to support cognitive health, your immune and digestive systems, and help support energy and endurance. Mushrooms themselves can help balance our response to stress, however, MycoAdapt has the benefit of the adaptogenic root Astragalus. Astragalus root is one of the most valuable apoptogenic herbs. Believed to have special properties supporting the overall equilibrium and energy of the body, Astragalus remains popular for its role in supporting the regulation of the immune system, supporting cognitive health and healthy immune cell activity.

Lion’s Mane mushrooms, like other mushrooms, are regarded for their potential to support a healthy immune response and act as an adaptogen by supporting the body’s perception of stress. Unique however to Lion’s Mane are two compounds, hericenones and erinacines responsible for Lion’s Mane mushrooms’ impact on cognitive health. Not only do studies show Lion’s Mane may influence neuronal growth factors in the brain but additionally shown to help modulate neurotransmitters associated with stress response. MycoAdapt does not rely on Lion’s Mane alone but pairs this cognitive mushroom with another called Cordyceps.

Cordyceps, especially, are known to help promote energy to the cell, which can both have an impact on the overall “vital energy” one may experience. One study revealed that when participants took a 4g mushroom blend containing Cordyceps, for three weeks, they showed more improvements than the placebo group when measuring the amount of time before reaching physical and respiratory exhaustion when exercising at maximum intensity. (4) While the benefits in athletic endurance may seem to be only of benefit to a select niche or population, Cordyceps has also shown, in a clinical study, to be of benefit to an older population concerned about muscular health and sustained energy throughout the day. Researchers believe this may be due to the antioxidants found in the Cordyceps fungi and their impact on oxygen efficiency in the cell.

Because the accumulation of different stressors can also cause an imbalance in the gut as well as cognitive fatigue, Turkey Tail makes the perfect addition for helping to encourage a healthy gut and promoting a healthy immune system. Turkey Tail mushroom is a powerful immune-supporting adaptogen that is rich in polysaccharides and is primarily known for its calming effects on the digestive system because it contains prebiotics that prompt good bacteria to the gut. MycoAdapt’s gluten-free, vegan formula provides a tri-blend of mushrooms (Cordyceps, Lion’s Mane, Turkey Tail) paired with Astragalus root, work in harmony to provide energy to the cell, immune and digestive support.

MycoAdapt is a dietary supplement formulated to support your immune system, provide energy and naturally aid in your body’s digestion and healthy stress response. Add this daily supplement to any beverage or mix it into your next cup of soup and reap the benefits of this fountain of youth with no aftertaste or caffeine jitters! MycoAdapt is ideal to make these beverages functional beverages because now your coffee, shake or greens powder has Lion’s Mane to help support cognitive health and promote mental clarity, Turkey Tail to support your immune and digestive systems, and Cordyceps to promote your natural energy and physical endurance.

*These statements have not been evaluated by the Food and Drug Administration. This product(s) is not intended to diagnose, treat, cure, or prevent any disease.

Cordyceps powder (1.3 g)
Cordyceps is a fungus found in Asia. Cordyceps is composed of several bioactive compounds. One of the most important compounds found in Cordyceps is called cordycepin. Cordycepin has been studied extensively for its role in immune health. Like other mushrooms, Cordyceps also contains polysaccharides. Polysaccharides protect against oxidative stress, but as with other mushrooms, some of the effects of Cordyceps occurs through its ability to affect cytokine production. Cytokines are small proteins that act as mediators in immune responses. In addition to supporting immune health, Cordyceps has been studied for supporting endurance. Cordyceps supplementation also appears to promote lactic acid production, which helps to affect muscle fatigue, supporting endurance and normal blood flow.

Lion’s Mane (Hericium erinaceus) powder (1.3 g)
Hericium erinaceus, commonly known as “Lion’s Mane” or “hedgehog” is a culinary mushroom. It grows on the dead trunks of hardwood trees such as oak, beech or Japanese walnut and it has been used as a food and medicine in East Asia since ancient times. This mushroom contains polysaccharides, which are responsible for many of its health benefits. Lion’s Mane also has bioactive compounds, including phenolic acids, which are considered to be antioxidants. Additionally, some preliminary clinical research suggests this mushroom plays a role in supporting digestive health. Each of the constituents that make up Lion’s Mane have been reported to have effects in supporting immune health, but it is actually most studied for its benefits for promoting cognitive and neurological health.

Turkey Tail powder (1 g)
Turkey Tail, also known as Coriolus versicolor, is a common mushroom that grows on the stumps and other decomposing wood of broad-leaved trees. Of all the mushrooms used today for their health benefits, more research has been performed on this species than any other. Turkey Tail contains polysaccharides, as well as terpenoids, and sterols, which are thought to be the active components of coriolus and are used medicinally. The most important compounds are the polysaccharides because they have a strong ability to carry biological information and therefore support health in many areas. Turkey Tail is used for supporting immune health. While the exact mechanism of their actions is still not completely understood, their role in immune health is very clear.

Astragalus (root) powder (455 mg)
Astragalus is a flowering plant that includes herbs and shrubs and is cultivated in Korea, China and Mongolia. The important part of astragalus is the root as it contains active constituents including more than 40 saponins such as astragaloside, several flavonoids and polysaccharides. It has been used for centuries and is most often referred to as an "adaptogen." Adaptogens are compounds that help the body “adapt” to stress by resisting physiological and psychological stress. In addition to promoting a healthy stress response, the antioxidant effects of astragalus may help with its role in digestive health benefits and overall health. This ingredient has also been shown to work via various mechanisms which have a clear role in supporting immune health.

If mushrooms are adaptogens, can I still take other stress formulas in combination with this one?
All adaptogens provide a unique function for the body. Consuming a mixture of adaptogens is best. Different adaptogens provide different health benefits, such as supporting the immune system, promoting neurocognitive health, supporting adrenal functioning and digestion.

What are the perks of taking this supplement in powder form?
Those who don’t like to swallow pills or capsules but enjoy their morning coffee etc. or are looking for a supplement that can promote energy without caffeine will benefit from this supplement. Add this supplement to your daily tea, smoothie, energy drink, or add it to your favorite soup.

What makes something an adaptogen?
An adaptogen is a non-toxic substance that aids the functioning of the body and its physiological responses in some way, such as metabolism, the immune system, the endocrine system, the digestive system, the respiratory system, etc. Overall, adaptogens help support the harmony of the body and its many systems that play into the overall immune system. They include various properties such as flavonoids (antioxidants), vitamins, prebiotics and polysaccharides that help can encourage the body to respond to different stressors in healthy ways.

Are there any side effects I should look out for when taking this supplement?
Side effects may include slight or mild GI discomfort, diarrhea, dry mouth, nausea, darkened stool or darkening of the nail pigmentation.

Is there any warning I should be aware of prior to taking this supplement?
Those who take medications for diabetes or blood-thinning/anticoagulant medications are highly recommended to check with their healthcare providers before consuming this supplement, as it may have effects on blood pressure or thinning of the blood. Supplementation of Cordyceps may also make some medications such as prednisone less effective. If you experience regular allergies, food allergies or have asthma you may be more susceptible to experiencing an allergic reaction(s), such as respiratory difficulties or discomfort or a rash. The ingredients in this formula may also interfere with immunosuppressants, diuretics, phenobarbital, beta-blockers and anticoagulants. When consuming very high amounts of supplementation you may experience adverse effects on the immune system, specifically those who take immunosuppressants or who have an ongoing auto-immune issue.

Why does the label state, “Country of Origin: China” for the mushroom blend?
China is the world’s leading mushroom and truffle producer, accounting for over 90% of the world’s production. China has a rich history around mushrooms, as they have been used as traditional Chinese health support for hundreds, if not thousands, of years. China was the first to begin the cultivation of mushrooms in the early 13th century. They have many research centers dedicated solely to the development and growing of mushrooms.