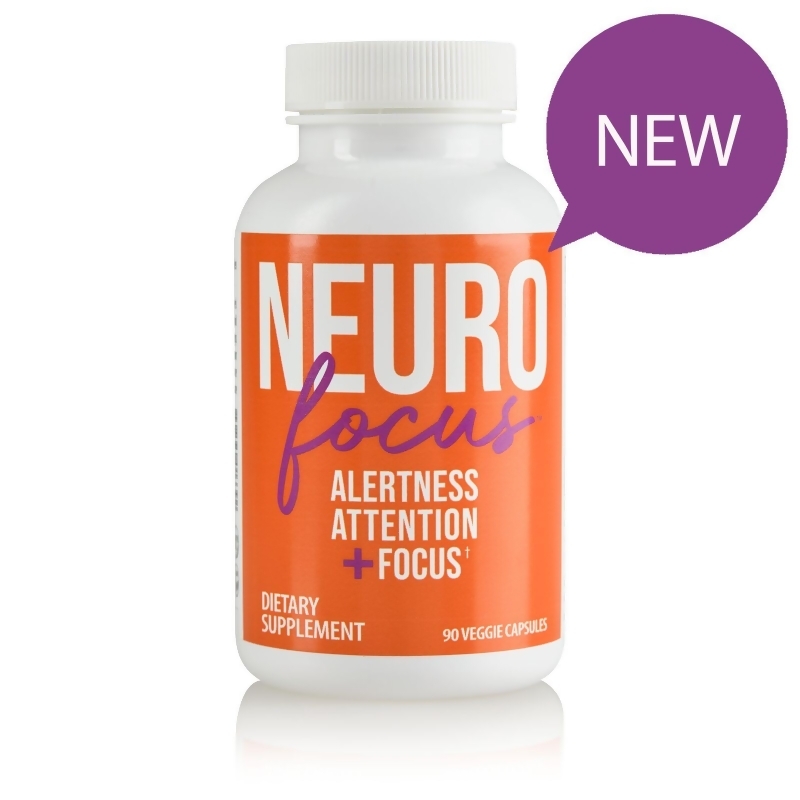 What Makes This Product Unique?

Neuro Focus™, is formulated with clinically supported ingredients for optimizing brain vitality. (1) This formula was developed to support cognitive performance, the basis for good neurological health in a hyper-stimulated environment such as online video conferencing, graphics and desktop publishing, academics, gaming, and social media. Our daily grind requires us to constantly multi-task and organize details, even when they are changing fast. Today we are often trying to manage a technological environment requiring us to be mentally agile, and able to think and react just as fast as new information comes our way. Neuro Focus™ offers the functional ingredients often referred to as nootropics. Nootropics are ingredients that may help or support cognitive function in healthy adults; in particular, executive functions, memory, creativity, and motivation. Neuro Focus™ was formulated to help us with the mental agility and to get things done without mental exhaustion.

Some say our attention spans are shrinking while others believe that the human brain is just evolving to function differently than it once had. Each of us has a different level of concentration; some of which can be influenced by contributing factors such as genetics, attention deficits, age, emotional flexibility, and stress. The ever-evolving digital era we find ourselves intertwined in has forced many individuals to adapt and acquire the skill of splitting our concentration among multiple tasks simultaneously. Although it has improved the speed at which we can communicate and work with each other it has also enabled more distractions, leading some to take up the craft of multitasking to keep up with their day-to-day demands. Focus, or the ability to concentrate efforts on a task without interruption for a given time, is crucial to everyday functioning and personal safety. Neuro Focus’™ distinctive formula, developed with a unique blend of ingredients, offers nootropic support for working memory while promoting mental performance and flexibility. (9)

Neuro Focus™ contains 800 mg of Neuravena® - an extract from a proprietary variety of wild green oat herb, Avena sativa L. - grouped with 1,000 mg of L-tyrosine which work together to promote the delivery of neurological properties to the brain that help to support mental drive, clarity, and provides individuals with the added benefits of sustained cognitive performance. Breaking down the word Neuravena® (Neur, being the Greek origin for the word ‘nerve,’ and Avena, an old-fashioned term for the word ‘oat’) hints at this ingredient’s function it has demonstrated to provide the brain, seen in various neurological studies. (1, 9) Neuravena® contains various bioactive compounds; one of which being flavonoids which contain antioxidants that have the potential to promote improvements in cognitive performance and memory. (1) One study conducted on elderly volunteers, with below average cognitive performance, performed a cognitive task after consuming a single dose of Neuravena® and showed a significantly greater amount of electrical brain activity, in comparison to the placebo group, within the frontal and temporal lobes of their brain. (9) Thus, the study revealed that Neuravena® can support an increase in neurological brain activity that is linked to the areas of the brain that are associated with memory. (1, 9) Another study on the acute effects of Neuravena® demonstrated that those who were administered 800 mg of the supplement reported higher results on various cognitive tasks in comparison to the other test group who received 1600 mg of Neuravena®. (1) Overall, the study demonstrated the dose 800 mg or below of Neuravena® served as an optimal dose. (1)

When paired with the unique ingredient L-tyrosine, Neuro Focus™ works to promote a happy cognitive environment supporting the release of various neurotransmitters within the brain such as epinephrine, norepinephrine, and dopamine. Each of these neurotransmitters carry messages between brain neurons and the nervous system and play an important role in the amount of alertness, adrenaline, wakefulness, retrieval of memory, and motivation that an individual experiences. A survey conducted on more than 2,000 business professionals, revealed that 95% of those business professionals admitted to multitasking during meetings. A great number of those same individuals also reported that when multitasking, they had more difficulties retaining information and made more errors in their work. Supplementation of L-tyrosine has shown to assist in the ability for those to switch between multiple cognitive concepts more easily and handle multiple cognitive thoughts or tasks simultaneously; an ability that is paramount for multitasking more effectively.

Modern times call for modern measures, Neuro Focus™ delivers an encouraging formula that may amplify focus and cognitive energy while avoiding burnout. This vegan and gluten-free formula offers a brain supplement that works as nootropic support without relying on caffeine. Promote your mental agility by adding a little extra nutrition into your everyday routine that can help support the sustained cognitive performance you need to take on life’s daily odysseys.

Includes the well-researched Neuravena® and the powerful L-tyrosine to provide balance and stability to stay productive and do it all.

*These statements have not been evaluated by the Food and Drug Administration. *This product(s) is not intended to diagnose, treat, cure or prevent any disease.

L-Tyrosine 1,000 mg
Tyrosine is a nonessential amino acid – meaning that it is naturally found in the body – synthesized from the essential amino acid phenylalanine. L-tyrosine is the precursor for the synthesis of catecholamines – hormones such as dopamine, norepinephrine and epinephrine, thyroid hormones, and melanin. Dopamine, norepinephrine and epinephrine play roles in mental health, cognition, behavior, and stress response. Dopamine regulates your reward and pleasure centers and is also important for memory and motor skills. Additionally, low dopamine levels may be linked to reduced cognitive flexibility – our ability to switch between different mental sets, tasks, or strategies. Because tyrosine is a precursor of dopamine, recent science is exploring its ability to facilitate cognitive flexibility in stressful situations. Norepinephrine and epinephrine are hormones responsible for the fight-or-flight response to stressful situations. Dietary sources of tyrosine include beans, nuts, seeds, dairy, meats, fish, eggs, and some grains.

Key mechanisms of this wild green oat extract include monamine oxidase B (MAOB) inhibition and phosphodiesterase 4 (PDE4) inhibition. MAOB is an enzyme that breaks down biogenic amines in the brain such as dopamine, phenylethylamine and benzylamine, and a lack of these biogenic amines is correlated with central nervous system dysfunctions. Neuravena® binds to, and consequently inhibits MAOBs, therefore preventing the breakdown of amines, specifically dopamine. (9) This means that there will be a greater storage of dopamine available for the brain to release. (9) Another inhibition that Neuravena® shows is that of phosphodiesterase 4 (PDE4). (1) Phosphodiesterases (PDE) are also enzymes, although these enzymes break down cyclic nucleotides, and a lack of cyclic nucleotides are also correlated with central nervous system dysfunctions. PDE4 is a phosphodiesterase specific to cyclic adenosine monophosphate (cAMP) – a nucleotide known as a secondary “messenger” involved in many important biological processes. SUCH AS. Neuravena® mediates PDE4-inhibition, consequently preventing the breakdown of cAMP, meaning there will be a greater storage of cAMP to maintain physiological brain functions. (1) 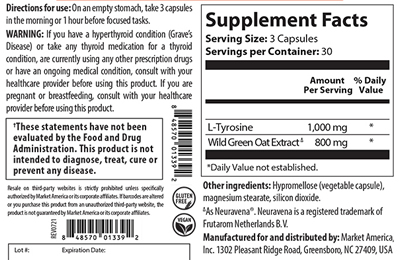 Are there any specific warnings associated with this supplement?
The amino acid Tyrosine is a precursor to thyroid hormone, individuals with Graves disease or elevated thyroid hormone should consult with their health care provider before consuming this product.

Who should take this product?
Those who want to supplement their diet to support overall health functioning for mental energy, mental stamina, and agility. This formula would also be suitable for individuals who have an occupation or a daily routing that requires a large proportion of their day to be spent online or with focused tasks.

Is Neuro Focus okay for women who are pregnant?
Individuals who are pregnant/breastfeeding should also check with their healthcare providers prior to adding this supplement to their daily routine.

Can children take Neuro Focus™ formula?
No, this product is intended for those who are 18 years of age and older.

How long does it take for Neuro Focus™ to start working?
This supplement is expected to begin working within one hour of consumption but may differ slightly from person to person based on the speed of which metabolism occurs.

What are the directions to use this product?
Take 3 capsules in the morning not with food or 60 minutes prior to any activity which requires mental agility or stamina. It is recommended that you do not exceed more than 3 capsules per day.

Could this supplement affect my sleep?
It is uncertain if Neuro Focus™ could have an effect on your sleep patterns. However, because this product contains ingredients that work to promote increased alertness and adrenaline, it is suggested that you do not consume to close to bedtime.