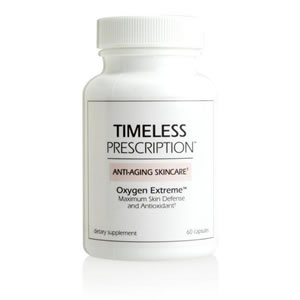 Scientists now believe that by increasing the body's intake of antioxidants, one can stay healthy longer. The challenge: finding the right antioxidants, in the right amounts, to effectively target the different types of free radicals in the body.

Vitamin A (Beta-Carotene): 5000 IU
Vitamin A is an anti-aging micronutrient of the highest order, standing firmly alongside vitamins C, E and the mineral selenium in its ability to help maintain health. Studies conducted over several years indicate that beta-carotene may play a significant role in helping to maintain overall health. Beta-carotene acts as a precursor of vitamin A and is therefore called a pro-vitamin A compound. Foods or supplements containing beta-carotene are converted to vitamin A for the maintenance of healthy skin, good vision and a robust immune system.

Vitamin C: 200 mg
Also called ascorbic acid, vitamin C helps to maintain healthy collagen in the skin, promotes normal healing, promotes healthy teeth and bones, and boosts the immune system. Vitamin C is one of the more powerful and well-known antioxidants. Just as exposing a cut from an apple to air causes it to quickly turn brown, cells of the body can also suffer when exposed to oxygen, a process known as oxidation. Oxidation causes aging of the skin as well as all other organs and tissues of the body. Vitamin C, as a free-radical fighter, helps the body maintain its youthful qualities for longer periods of time.

Vitamin E: 30 IU
Vitamin E supports the respiratory system. It also promotes a healthy immune system. Vitamin E protects the body from oxidation, a normal aging process by which oxygen breaks down the body’s tissues. It works to neutralize free radicals, which are naturally occurring unstable molecules that can damage the body’s healthy molecules by taking electrons to balance themselves. When enough vitamin E is present in the body, unstable free radicals get their electrons from the vitamin E molecules and leave the healthy molecules alone, thus promoting the health of tissues.

Selenium: 200 mcg
Selenium is one of the most important micronutrients to include in a longevity-minded health regimen and is frequently cited by anti-aging specialists as an antioxidant that should be included on an anti-aging checklist. Selenium and vitamin E, another powerful antioxidant, are synergists, meaning they each improve the efficiency of the other. Moreover, selenium promotes the body’s production of glutathione peroxidase, the body's master antioxidant. Selenium is an essential trace mineral that works closely with vitamin E to provide the body with powerful antioxidant protection from free radicals. Selenium protects the body from free radicals in two ways: It is incorporated into proteins to make selenoproteins, which are important antioxidant enzymes, and it supports the body’s manufacture of its own natural antioxidant, glutathione.

Bilberry: 25 mg
Bilberry’s chief action as an antioxidant is its powerful synergy with vitamin E. On the most basic level, it supports the normal resistance of blood capillaries and promotes their impermeable nature. Bilberry anthocyanosides also supports the operation of crucial enzymes in the enzymes in the retinal cellular metabolism and function. It also supports a healthy heart. Bilberry promotes normal platelet activity.

Milk Thistle: 50 mg
Milk Thistle is used to promote liver health. Contains some of the most potent liver-supporting substances known. Protects against free radicals by acting as an antioxidant, protecting the liver. Supports the normal production of new liver cells. 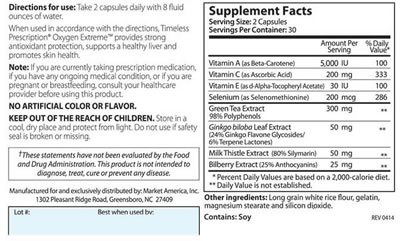 How are free radicals formed?
Normally, bonds don’t split in a way that leaves a molecule with an odd, unpaired electron. But when weak bonds split, free radicals are formed. Free radicals are very unstable and react quickly with other compounds, trying to capture the needed electron to gain stability. Generally, free radicals attack the nearest stable molecule, stealing its electron. When the attacked molecule loses its electron, it becomes a free radical itself, beginning a chain reaction. Once the process is started, it can cascade, finally resulting in the disruption of a living cell.

The body can usually handle free radicals, but if antioxidants are unavailable, or if free radical production becomes excessive, oxidation can occur. Of particular importance is that oxidation caused by free radicals accumulates with age.

Vitamin E is the most abundant fat-soluble antioxidant in the body. It is one of the most efficient, chain-breaking antioxidants available. It is a primary defender against oxidation and lipid peroxidation (creation of unstable molecules containing more oxygen than is usual).

Vitamin C is the most abundant water-soluble antioxidant in the body. It acts primarily in cellular fluid. It is particularly effective in combating free-radical formation caused by pollution and cigarette smoke. It also helps return vitamin E to its active form.